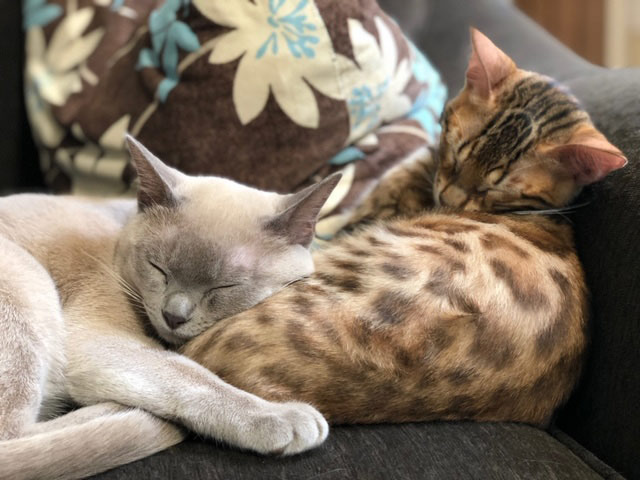 I received a call from a couple who were dealing with a serious cat aggression problem late August, 2019.  They had tried several approaches to integrate their kittens but weren’t able to resolve their aggression problem and weren’t making as much progress as they wanted.  Fortunately, we were able to set up an appointment for an in-home cat behavior consultation early September.

At their home, I did a comprehensive environmental analysis and interacted with each kitten separately to determine each kitten’s prey preferences, hunting styles and personality differences.  Thankfully, the kittens had already been separated for a while due to their aggressive behavior.  Even though the couple had tried several types of approaches to “integrate” the kittens, I felt the best thing to do was start over with a different approach.  Since their cats were so young and energetic, we had to make sure we had a treatment plan that took into consideration where the kittens were in their maturation process, their diet, and their need for feline enrichment.  Making sure each kitten felt safe was a top priority too!

Since the couple had already implemented some scent swapping techniques, I recommended we start with two processes. The first was to provide at least two 10 to 15 minute high-intensity hunting sessions, or workouts, per day with each kitten in their respective rooms using effective and safe cat toys, followed by a healthy treat. The other process was to purchase a “kitty playpen” (4’ H x 3’ W x 2’ D) with 3 adjustable ledges and rollers.  Letting each kitten have some time alone in it provided a space where each could feel safe in the presence of the other kitten, especially when on the top ledge in the playpen. The playpen made it possible for them to be very close together, seeing each other, smelling each other, and even interacting through the bars safely, until they could start having some short periods of supervised time together without barriers. This really made a big difference.  Again, using healthy treats for positive reinforcement was very helpful during the reintroduction period. 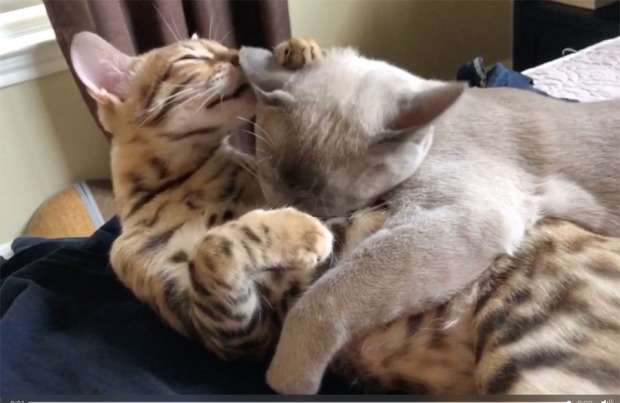 Resolving cat behavior problems is a complex process and can often take much more time and effort than expected.  However, this very patient and compliant couple remained undaunted and very committed throughout the entire process which took almost 6 weeks.  They now play together and while they chase and fight occasionally, it’s the type of fun playing we expect from kittens!  Time is always our friend when working with cats!